Okay - You might NOT get Lung Cancer - But How Lucky Do You Feel?

If you smoke and you are worried about getting lung cancer then read on.

Many people believe they will not get cancer because no one in their family has had it but relatively few types of cancer are inherited.

Only 20 hereditary types have been identified to date and combined, they account for less than 1% of cancer cases. If a cancer gene is inherited, then those people who have inherited that gene will have a higher risk of developing a specific cancer than the general population. For the other greater than 99% of cancer cases there must therefore have been a "trigger" such as an environmental or chemical factor.

When someone is born with genes that increase the likelihood of cancer they are said to have a hereditary predisposition for the disease. A person with a predisposition may never get cancer but they have a higher risk.

Many cancers can be directly or indirectly attributed to environmental factors called carcinogens. Nicotine is not a carcinogen but cigarette smoke is because it contains many metal based chemicals such as cadmium.

Carcinogens cause the conversion of a healthy cell to a cancer cell.

Of all of the cancers which are caused by chemical or environmental factors, 40% are due to one single source of carcinogen: cigarette smoke. 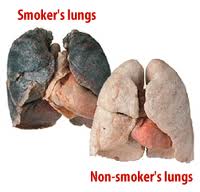 This is because of the 599 chemicals  that cigarette smoke contains. It is also because the cigarette smoke is taken directly into the fragile respiratory system repeatedly.

Small cell lung cancer which starts in the middle of the lung and is the cancer most related to smoking, spreads very quickly and is often well developed before it is diagnosed - this means it is often too late for treatment because it spreads to lymph nodes nearby.

Many smokers cough, have pains in their chest get out of breath and often get recurrent infections and these are all symptoms of lung cancer.  It is for this reason that many smokers do not go to the doctor and it is then too late for effective treatment.

Specific carcinogens will affect only those cells capable of responding to that particular physical or chemical stimulus. Our cells each have different sensitivities.

For example; benzene can cause cancer of the blood, cigarette smoke causes lung cancer and vinyl chloride causes liver cancer. Very few stimuli can cause cancer throughout the body - the exception is radiation which has the ability to convert any of the body's healthy cells into cancer cells.

Don't be one of them!

Return from "Lung Cancer" to "How to Quit Smoking"