Mum has kindly offered to tell Dad's Champix success story in her own words:

I am 76 years old and I have spent 70 of those years among smokers. I was bought up in a small house in England where both my Mum and my Dad were 30 a day smokers: Dad rolled his own, they were stronger than tailor-mades and smelt awful. I remember as a child living in a house filled with smoke - it was like living in a London smog. Both my parents died in their 70's: Mum of a stroke and Dad of emphysema.

Growing up in a house where both parents smoked of course I was tempted to try it and at the age of 15 I took my first puff. It was awful but all the ads made it look so sexy and I wanted to fit in so I tried a few more times but just couldn't take to it -thank God!

At 21 I met my husband, he was a 20 a day smoker which added to the smog I already lived in. Before you judge me and say that I could have said something you have to remember that in the 50's and 60's girls didn’t do that. At the age of 30 I was diagnosed with asthma and spent most of the first two years of my marriage in hospital. Back then they didn't have the medication they have now.

My husband and I decided to emigrate to Australia hoping that the climate would be better for my asthma. We had two daughters who took up smoking as teenagers so now I was living in a smoky fog once again.

I remember all three of them trying to quit over the years but there were no drugs like Champix back then.

Eventually the girls married and moved out but I was still living with my darling 20 a day man. Over the years hubby would get the occasional bout of bronchitis or simply a cold that went to his chest but he never tried to quit - he always maintained that he enjoyed smoking. Finally hubby got a nasty cough that could only be described as a smoker's cough - but he wasn't going to admit to that!

I tried so many times to get him to give up smoking but I was considered a nag. One day I noticed how slowly he was walking and how he seemed to be constantly out of breath. Of course he denied it insisting he was fine and that it was me rushing about everywhere. I talked him into having a full check up and x-rays - the results were as I expected - he had emphysema.

I wasn’t surprised as his own father had died of this awful lung disease AND his two sisters had it. One of his sisters has since died. So all these years of smoking have resulted in a whole family having COPD (chronic obstructive pulmonary disease). Obviously he was told to quit smoking immediately (easier said than done) and I was dreading it as I have seen people try to quit smoking and I know how very hard it is. Champix was recommended to him and although sceptical he was willing to try anything.

Champix came to the rescue, he was on it for maybe a few weeks and said he felt great. I don't recall him suffering too severely with the nicotine withdrawal but maybe he now had a reason to quit. It has been six years since he quit but it is not going to help his problem because the damage has already been done - perhaps it may slow the progression down. He is a walking Champix success story.

Emphysema is a walking death sentence - you can take all the medicine available and do all the exercises but you can’t stop it. This was not how I planned our retirement years - there is no dancing, no long walks and every holiday or outing has to be carefully planned for. He can’t even do his shoe laces up or get dressed without gasping for breath. It takes 100% of his energy just to breathe. It so sad to see him like this, there is an advertisement on TV where a man is looking out of the window watching his wife mow the lawn because he can’t do it...... I can relate to that.

On the positive, side if Champix had not been invented I don't know how my husband would have quit - he really had tried everything else! Obviously I am thrilled with his Champix success I just wish it had come earlier.

So when your partner has a go at you for smoking don’t call them a nag they are just trying to help. Stop believing that "it won't happen to you" - okay, you maybe one of the lucky ones but they are VERY rare - think of your loved ones.  Become another Champix success story!

Thankfully I can control my asthma but you can’t control emphysema. One thing that has come out of this is a smoke free house and I get to cuddle up to a sweet smelling hubby instead of a smoky bear - but what a price to pay! 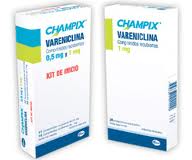